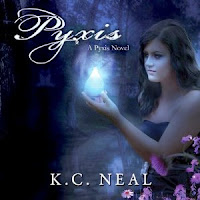 Pyxis recently released in audiobook format, and I was lucky enough to get to choose the voice actor to do the recording (my publisher, StoneHouse Ink, is awesome like that). Lisa Cordileone was my top pick, and I was thrilled when she agreed to take the project.

This is the first half my interview with Lisa, and it starts with a really cool behind-the-scenes video about the making of the Pyxis audio book. If you've read Pyxis, this is essential viewing - Lisa talks about how she developed the different characters, and it's a lot of fun to hear her takes on Corinne, Mason, Angeline, Andy, Grandma Doris, Great Aunt Dorothy, and Mr. Sykes. Take a look!

K.C.: I’m really curious about your background and what led you to work as a voice actor. Do tell!


Lisa: I’m an actor based in Chicago, studied here at Second City after graduating with a BFA in Acting, and have performed in Theatre, Improv, Commercials and a few Film projects. I’m turning my focus towards independent Film projects, and interestingly, this offbeat category of voice over..audio books. When I first moved here I was on an open call for an agent and someone sitting in the room said, ‘hey you have a great voice!’ I was hesitant at first, but it eventually led to a Commercial VO Demo, and now I’m with a great agent in Chicago auditioning primarily for commercials, and then on my own for audio books.

K.C.: What was the first book you narrated professionally, and what was the experience like?


Lisa: It was called 86400 by Lavaille Lavette. It’s a non-fiction spiritual self help book, distributed by Gildan Media. This was a very interesting experience, mostly because I recorded this book from my home studio without a director-- and learned very quickly about self editing and trusting myself in this work.

K.C.: What are some other audio books you’ve performed since?

K.C.: What do you think makes someone suited for voice work, and specifically audio book work?


Lisa: I’m still learning, but in my experience, I think you need to be aware of the best qualities of your voice and how best to use them. Knowing whether your voice is more resonant, nasal, what your vocal range is, how articulate or even off the cuff you can be. The commercial world has it’s own standards and challenges, but once you get use to reading commercial copy you start to get a feel for the rhythms, how to break a script down and ultimately make it your own. Audio books are like the cross country of voice over. I think what makes someone well suited for the challenges, are the longer hours in the studio and having the patience and discipline to take care of your voice. I think if you are able to read a book and identify with what the author is trying to say, and convey the voice of the narrator, the characters just fall into place. Actors are part of telling a story, audio book actors are telling every part of the story.

Watch for Part 2 of the Interview later this week!

Pyxis: The Discovery Audio Book on Amazon/Audible - Now 10% Off

It's so awesome that Pyxis is available in Audiobook form!! :)