This is the first in a series of posts about Twitter. And I'm gonna be honest with you: in this post, I'm basically going on about how much I love Twitter and why. Practical info will come later. :) 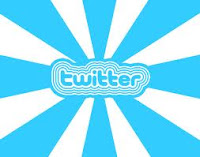 How It All Started....
I created my Twitter account in 2009, not totally understanding what I was supposed to do with it. I mostly followed famous people. It was mildly entertaining, but not very engaging because I wasn't interacting with anyone. I found a few interesting non-famous people to follow, but still, it didn't really take off for me. No one I knew IRL was on Twitter.

Fast-forward to February of this year.... I decided I needed to ramp up my Twitter activity because I wanted to publish a novel, and it seemed like I was reading everywhere about how authors needed to be on Twitter, Facebook, etc, for marketing purposes. I had about 60 followers at the end of February 2011, and I knew I needed to change that. So I started finding writers and book bloggers to follow. I talked to them, and some of them talked back. A bunch of them started following me.

In the months after I got more involved with Twitter, I became FB friends with many of my Twitter friends, and that just gave us one more way to get to know each other. We followed each other's blogs and reposted or retweeted each other's updates. I've gotten to know some of my online friends well enough that if I'm quiet for a day or two, they wonder where I am and ask if everything is okay. It's pretty cool. :)

Apart from connecting with other writerly and bookish people, I started following some local tweeters - turns out Boise is one of the most active U.S. cities on Twitter - and I've met maybe 20 or so IRL. For someone who normally hates talking to strangers (*raises hand*) and trying to make smalltalk (*raises hand again*), Twitter has been a great prelude because in most cases I've already had some online conversations with tweeps before I meet them for reals. So they're not really strangers.

It's not easy to explain to people who aren't on Twitter, but tweeps' personalities shine through remarkably clearly despite the 140-character limit. A person's sense of humor (or lack of it) somehow gets distilled and focused. And let's face it - you have to be pretty articulate to survive on Twitter.

I Just... Freaking LOVE Twitter
I love every part of the Twitter experience: the pithy updates, fast pace, highly interactive yet low-obligation format... and yeah, the sense of voyeurism you get when "listening in" on a bunch of public conversations.

Back in Feb I had about 60 followers. Now, I have around 700 (I'll talk more about how I gained followers in my next post). I've connected with so many people on Twitter who I'm sure I never would have found otherwise. I started out thinking I'd be using Twitter as a marketing tool, but that's taken a back seat to keeping up with my friends... and just having fun. :)

Great post. It's always hard for me to get followers on twitter but that's probably because I feel like most people don't want to chat and help promote. lol Maybe I can learn a thing or two from you.

Hey Vera! It took a little time - 2-3 months - before my follower numbers really started to take off. It helps if you can find a few new friends to talk to, and then their followers notice you and start following. It's a process, but once you reach a certain threshold it'll take off for you. Book bloggers are very popular with authors, so I'm sure it's just a matter of time before you start gaining a bunch of new friends! Thanks for commenting. :)

I love facebook, but was told that I needed twitter for the same reason you did. I got a twitter account, but I dont know what to do with it. Thank you for this blog it helps.

I think most people are bewildered by Twitter at first. Stick with it, though - when it starts to take off for you, I think you'll find it's a lot of fun. Thanks for your comment, Linna!

Thanks for this post! I joined Twitter for the same reason. Somehow I've gotten followers even though I almost never post. But here's my question -- do you actually have conversations with people? Are you supposed to respond to posts like on Facebook?
Oy, this thing confuses me!

Hi Merry, thanks for your comment! Absolutely - I have conversations on Twitter all the time. If you see a tweet that's funny or interesting or just catches your attention somehow, hit reply and respond to the person. Sometimes people respond to you, and that's how conversations get started. :)